In my last post I cut to the chase and announced my marathon results. What I didn’t explain was the significance of my race time.

Back in June I outlined my race plans for the summer up until the Montreal Marathon. At the end of that post I said this about my marathon goals:

“I have big goals. That’s right Oprah I’m coming for your time sister (Oprah ran the Marine Corps Marathon in 1994 and finished in 4:29:15)! I’m light years from ever qualifying for Boston so I need to shoot for something more attainable. Given the way my training runs are going I actually do have an even bigger goal in mind, but I’m going to keep it to myself for now.”

For some time now I have been running at a sub-10 minute/mile pace. When it became more consistent run after run I was astonished considering where I began with my running. My speed has improved so naturally and gradually over the course of my running. I don’t have a coach or anyone forcing me to do more than I am doing. I do speed training and some high intensity interval training to help improve my speed, but I am always mindful to do what feels right to me. I love running and I want to continue to love running. However, if it feels too much like work then I might not love it so much anymore.

In order to accomplish my goal of beating Oprah’s time (which really was just a fun way to strive for a sub-4:30 time) I would have to average a pace of 10:16/mile. My last marathon time was 4:38:52 or an average pace of 10:38/mile. When I first set my sights on running another marathon this seemed like a lofty goal, but one to work towards. As I began my training I also started to feel like I might be able to challenge myself even more given the improvement in my speed and overall running. So I set three personal goals:

Ok that’s a whole lotta numbers. Are you still with me?

The bottom line is this training was vastly different than my previous two marathons. I have begun to come into my own with running. I have developed some confidence in my running and my ability to improve at running. I worked hard and pushed myself without pushing to the point of injury or burn out. I upped my weekly mileage as much as possible this time around. I was diligent about maintaining strength training 2-3 times a week and P90X Plyometrics once a week. I stretched and foam rolled. My hill training was awesomely difficult, but it yielded results. I ran races and set PRs in many of them. My long runs peaked at 22 miles, and included two 20 mile runs along new routes.

In reflecting on the training period I have also identified other factors that were instrumental in helping me to accomplish my goals. I had no setbacks in this training unlike the last two. Four months prior to Disney I broke a toe and two floating ribs and throughout my training for Philly I endured calf and Achilles issues. My diet is cleaner with a central focus on eating whole unprocessed foods as much as possible. I food journaled consistently throughout training either online or on paper. I have shed some weight since my last marathon. I paid close attention to hydration especially throughout the hot summer. I switched my fuel during long runs to Vega Sport Endurance Gel, pretzels and dates. Vega* products are entirely plant based and complimented my diet nicely. I drank Vega Pre-Sport Workout Energizer prior to long runs and races. My pre-race and pre-long run meal used to be toast, nut butter and banana. I have traded the toast for a chia pudding made with 1-2 tablespoons of chia seeds soaked in water or almond milk topped later with banana and nut butter. Weird, I know, but it didn’t weigh me down and I am really starting to wonder about the power of those little seeds! I also followed up my long runs with Vega Sport Recovery Accelerator. I seemed to bounce back very quickly from long runs this training. I know I can’t give all the credit to Vega Sport Recovery Accelerator, but I do believe it helped as I experienced little to no muscle soreness the following day after my 13-17 mile runs and much less than typical soreness on my 18-22 mile runs.

There is one other component that affected my training and ultimately the final event for me and it is largely psychological. Back in April I wrote about my PR in the Plattsburgh Half Marathon and my dear friend who, at that time, was recently diagnosed with breast cancer. What I didn’t tell you was that my friend was also pregnant with her second child. Throughout her chemo treatments this summer, pregnancy hormones, navigating life with cancer, a toddler and a baby on the way I have been completely humbled by my amazing friend who has handled it all with such poise and grace. She is truly a Wonder Woman.

There were moments during training and even during the race that felt difficult, but my thoughts immediately shifted to my friend and I pushed the discomfort away because I knew nothing could possibly be more trying or uncomfortable than what she has been going through. As a result I had so few doubts about this race. If she could kick cancer’s ass then I sure as hell could run another marathon faster than my last. In the grand scheme of what my friend has had to cope with this year I felt like the least I could do was push past my mental limitations once and for all.

I purposely chose this race in Montreal because I knew it would give me the opportunity to stop and see my friend as we passed through upstate New York on the way home. I didn’t know my final time yet when we arrived at her home. It didn’t matter. I knew I ran a great race. I felt phenomenal the entire way. Given the distance that separates us I couldn’t be there for my friend as much as I would have liked. I was able to spend a couple of weekends with her but mostly we stayed in touch through email, text and phone calls when possible. Her positive attitude, courage and fighting spirit are a constant source of inspiration and motivation. I thought about my friend so much during the marathon knowing that she is running her own marathon and there was no one else I wanted to share that medal with more than her. 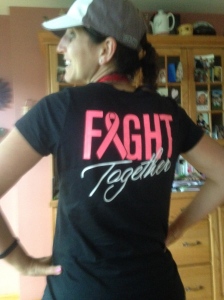 Race Together Fight Together

When I finally received my official time my eyes filled with tears. It’s not really about the actual time 4:16:35 or that I shaved 22 minutes off my marathon time. It is about me finally believing in myself. It is about reaching my full potential. It is about exceeding my own expectations. It is about committing to something, setting a goal and following through. It is about going the distance.

*I should note that I do not work for Vega, nor did I receive any of the aforementioned products from Vega. I purchased them with my own money and all opinions are my own. I was not contacted by Vega to discuss their products. I just happen to really love them.

5 thoughts on “Prelude to a Marathon PR”