I really wanted to get this race post up by Monday, but life happened and the blog post didn’t happen. So I’ll jump right into it. Last weekend was amazing!

Last Friday I took the entire day off to accompany Carlos’ class on a field trip to the Heifer International Farm in Rutland, MA. What an awesome experience! The upper elementary class has been selling soup each month to raise money to donate to Heifer International.

We got home around 3:45, I finished packing and we were on the road to Vermont by 4:15. Last year when we were talking about making the return to the Vermont City Marathon, I knew I wanted to spend the entire long weekend in Burlington. I didn’t want to rush through the weekend. We took our time on the way up stopping in Montpelier for dinner.

On Saturday morning we strolled through the farmer’s market in Burlington, tasting the samples including a little wine (sips just sips) and then enjoyed coffee on Church Street. I dropped Carlos and Orlando at the hotel so they could go swimming while I explored the expo…ALONE! I really wanted to soak it up and take my time wandering through the tables and exhibits. I’m so glad I did.

My sister and her husband arrived in the afternoon and we all met up for a stroll along the waterfront. At dinnertime Orlando and I left to attend the pre-race pasta dinner. I have always opted out of these dinners in the past, but honestly all I want to eat the night before a marathon is a simple plate of pasta. We trek around trying to find just that and this took all the guess work out it while benefitting a great cause. The proceeds for this event went to the Ronald McDonald House in Burlington. I also had the opportunity to hear Olympic bronze medalist, marathoner, Deena Kastor speak. She told a very interesting and witty story of how she became a professional runner.  Her journey is inspiring. I left the dinner feeling motivated and really excited about the marathon. Deena would be running the relay the next day with girls from a local high school track team. 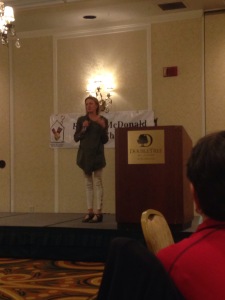 I slept horribly because I was worried my alarm wouldn’t go off. Typical pre-race fear. I was up at 5AM to engage in all my pre-race rituals. Carlos came down to the hotel breakfast area with me around 6. There were other runners down there and a very high strung spectator who was stressing me out. She kept telling her family to hurry all the while sitting down at the table eating her own breakfast. Her voice became very shrill at one point as she scolded the children and presumably the runner in her family for the 15th time. I told Carlos I had to get back up to the room because she started making me nervous about getting to the race one time.

Carlos begrudgingly posed for a pre-race photo. Remember how smiley he used to be in these photos?

I woke up an equally grumpy husband. Actually Carlos is truly a morning person, just not a take a photo of me first thing in the morning person. Orlando is definitely not a morning person so I let him sleep as long as possible and at 6:45 I told him it was time to go. The race was to start at 8:03 and I knew there would be a bit of traffic getting me close to the starting line.

They dropped me off about a half mile from the start and as I followed the mass of people down towards the starting area I was invigorated by the collective energy and excitement along the way. Oh how I have missed this feeling!! 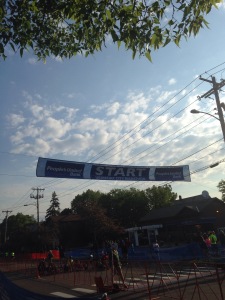 I wandered around soaking up the positive vibes. I took in the gorgeous view of Lake Champlain. The air was tinged with a light chill, but there was a hint of humidity signaling imminent heat that was to come later in the day.

Soon enough I found myself lining up somewhere between the 4:45 and 4:30 pacers. My internal voice kept telling me to avoid the pacers and just enjoy the race, what will be will be, but the hopeful side of me really just wanted to beat the elusive time of Oprah’s one and only marathon. It was a serious long shot though and by long shot I mean miracle.

During the national anthem I got goosebumps and tears welled up in my eyes. Geez what is it about these marathons for me?! I’ve been so lost since I crossed the finish line in Montreal in September 2013, but as the gun sounded I knew I was right back where I was meant to be and this was only the beginning.

The first 4 miles flew by. Then we found ourselves on the out and back portion of the course along a relatively flat highway. I thought it would be boring, but since you were able to see everyone ahead of you as they looped around it was fun cheering them on. The miles ticked away surprisingly quickly and before I knew it I was heading back into the city toward mile 9. I knew I would see my family very soon. 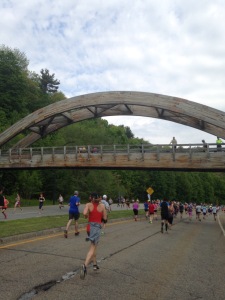 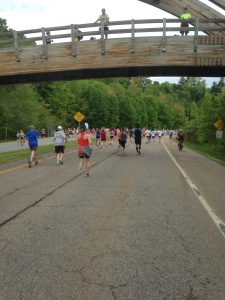 Orlando, Carlos, my sister and her husband were waiting for me just before I turned onto Church Street. I was so excited to see them. They had a Vega gel and a Perfect Fuel waiting for me. I stopped for a minute and then kept on going right down through the enthusiastic spectators along Church Street. This was without a doubt the best spot along the course. 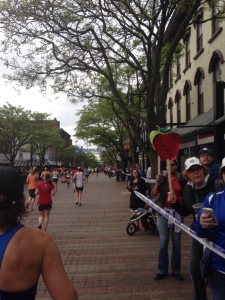 Once we left Church Street there was a bit of a lull in spectators. We wound through some nice neighborhoods and eventually reached the halfway point. I knew I ran a strong first half, not fast, but consistent. I felt terrific and I went with it.

However, shortly after the halfway point we entered onto a bike trail. It was narrow and suddenly I felt like I was in the midst of a herd of cattle on the verge of being trampled. I was stumbling to hold my pace and became claustrophobic. I had nowhere to go so I tried to just hold steady. Prior to this I was ahead of the 4:30 pacer and I thought maybe, just maybe I could hold onto it, but as we inched along this congested trail the 4:30 pacer passed me. I didn’t care. I just wanted off the trail. The scenery to my left was stunning and I tried really hard to focus on the lake instead of the 20 people at my heels.

The tightness of the trail and the heat started to get to me. I felt a bit nauseous. I longed to catch a glimpse of the road again, but all I could see were the runners at less than an arm’s length in front of me. I needed to take a gel or eat some pretzels, but the thought of what I had in my spy belt made me even more nauseous. I just wanted to drink. The water bottle in my hand was warm and uninviting. My insides were crawling and screaming “MOVE! Get out of my way people and get me the hell off this trail.”