One of the reasons I started running was because it was simple. I mean simple in the sense that all you need is a pair of sneakers. After my son was born I knew that I needed to find a type of exercise that I could do relatively quickly and without necessarily going anywhere. My gym isn’t far but it’s often challenging to find time to go. So running fit the bill. I could tie my sneakers, leave out my front door and run in any direction.

I didn’t run far enough to require water or fuel. Then things changed a bit. The iPod started to look something like this:

I started training for actual races and grew bored just running out my front door. Rather than run on a treadmill or a track I needed something to calculate my mileage. My workout gear started to look a little something like this:

I loved the Nike+ system. It took my running to an entirely new level. Suddenly I was not only able to run anywhere and know how far I had gone but I was made aware of my pace. My Nike+ and I trained for my first half marathon together. It was an invaluable tool.  Instead of running multiple times around the one mile loop at the nearby college pond I was able to run anywhere. This made running more interesting. The more interested I was the more likely I was to stick with it.

Most of my half marathon training took place during the summer – the summer of 2010 was an incredibly hot summer here in the northeast. Now that I was running anywhere my legs desired I needed to carry hydration on me. I found it uncomfortable to run with a water bottle in my hand. I checked out water belts but decided that was a big NO. I’m hippy enough. I don’t need anything else jiggling around that area. This seemed to be the only logical choice:

I remember getting ready for a long run with my Camelbak on for the first time. My husband, son and I all had a good laugh. Who the hell was I? I like my Camelbak, but I admit I don’t use it very often because I do feel a little ridiculous with it on my back. It is reserved for long runs only.

All around the blog world runners of every size, shape, speed and age were singing the praises of their beloved Garmin Forerunners. “Hmmm they look kind of bulky to me,” I thought. “I don’t need that I have my Nike+,” I muttered to myself wondering what all the fuss was about. Then just 3 weeks before my first half marathon my Nike+ died abruptly. I ran my last long run with an iPhone app that was so frustrating to use it somehow made me run more than 13 miles rather than the scheduled 12. Yes it’s all the iPhone app’s fault. I played around with a few other apps but I didn’t like them and they seemed to suck the battery life besides the fact that I had no desire to run with my iPhone.

One day a blogger announced a seriously ridiculous great deal on this:

The Garmin Forerunner 205 was on sale on Amazon.com for $89 plus I had a $25 gift card. So for $64 I added a new member to my running repertoire. It was indeed big, but I instantly understood what all the fuss was about. This gadget is as amazing as everyone claimed.

Back in January my car was broken into while I was running. My iPhone was stolen from its hiding place under the passenger seat. After that debacle I needed some way to carry my iPhone on me while running. A little skeptical at first I reluctantly ordered a SPIBelt.

The SPIBelt is incredible. It fits my phone and my bulky car key. Anyone wondering where I stored the car key before I bought this? Oh yeah in my sports bra! Back to the SPIBelt though. It stays in place, doesn’t jiggle and it is very comfortable.

The break in got me thinking about my safety as a runner. I run alone and although my husband knows where I run if something were to happen no one  would know who my husband was. So I got one of these:

This is a Road ID. The photo is taken from their website. The IDs are customizable and engraved with your personal information. It is thin, lightweight and unnoticeably comfortable while running.

Last but not least my iPod disappeared in April. Really, it literally just disappeared. I know exactly where I put it when I came into the house on that fateful day. Hours later it was gone, walked right out of here. We haven’t see it since. I managed to get an almost identical iPod Nano from Craigslist and that served the purpose until it started acting up. It now belongs to Carlos and for our birthdays Orlando and I splurged on this beauty: 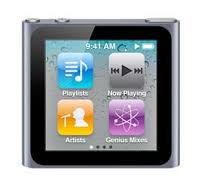 Orlando and I never run at the same time so it works for us to share the iPod. I love it. I wear it on my wrist like a watch while I’m running. I can switch songs with a button now instead of fumbling with the dial or screen which doesn’t work if you have gloves on.

Somehow over the course of a couple of years I’ve gone from a pair of running sneakers to all this gear. I feel a bit ridiculous sometimes, but it keeps me moving. It’s 5:30 on Sunday morning. You can probably imagine what I look like as I get ready to hit the road for my 17 mile long run. Orlando is going to bring Carlos to my Mom’s this morning because he has a job to do. I am planning to run to my Mom’s house which is about 15 minutes away by car. Remind me again, who am I?