Friday was a full day in Hershey, PA. The kids had no clue where we were going. It was fun to see the look on their face as we entered the town. There was much more to do at Hershey’s Chocolate World than I expected. We saw a 4D movie, went on a trolley tour, experienced a chocolate tasting, and created our own chocolate bars.

The trolley tour was my favorite part of the day. Our guide told us the life story of Milton Hershey and it was fascinating. I’m sure I had heard it years ago, but I was still enthralled in the tale of how he grew not only his business, but the town, and most importantly the school that bears his name. We drove by the home he grew up in, the school, the factories, the amusement park, and the gorgeous botanical gardens.

Back at Chocolate World we attended a chocolate tasting. We were given a little lesson on where chocolate comes from, how it is made, and how to properly taste the chocolate. We tasted Hershey’s Special Dark, Hershey’s Milk Chocolate, Dagoba Dark, and Scharffenberg Toffee Chocolate After tasting it we had to pick a flavor we detected and vote for it using the monitor on our table. The kids loved that part. They weren’t too keen on the dark chocolates, but I enjoyed them. It was just enough without overdoing it. 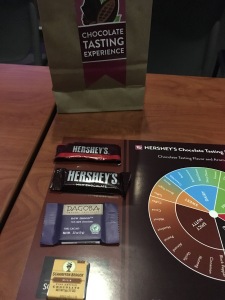 The kids’ favorite part of the day was creating their own chocolate bars. You were able to select the base of either white chocolate, milk chocolate, or dark chocolate. Next you selected any fill ins. I think our choices on that day were rice krispies, toffee chips, pretzel pieces or cookie dough. You could pick three of the fill ins and sprinkles for the top. We were all a little bummed that peanut butter was not an option.

You got to watch your chocolate bar on a conveyor belt. First the fill ins were added, then the the bar was dipped in more chocolate to seal in those extras, and finally sprinkles on top. While waiting for the chocolate bar to cool you got to create your own wrapper.

My candy bar was dark chocolate with pretzels. I’m thinking this would make a post Chicago Marathon treat! 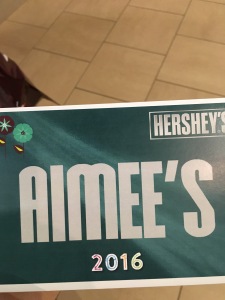 Surprisingly we did not stuff our faces with chocolate. We actually only ate the samples we got along the way. The boys ate a full size Hershey’s bar they got on the trolley ride. At the end I offered to get them each something in the gift shop and they declined.

Back at the hotel the boys swam again and then we went to dinner. I really enjoy spending time with Carlos and Tyler. At dinner we love playing the would you rather game. You know would you rather be able to teleport anywhere or be able to read minds. However, with 9 year olds the questions often involve various bodily functions. Although many of the questions were gross or hysterical some were downright thought provoking. Would you rather know when you are going to die or how you are going to die? (You can’t change the time or method of your death.)

After dinner we took a walk through the town of Gettysburg and then we met up at Ghostly Images again for another ghost tour.  This one included more outdoor ghost stories and a tour of the Jennie Wade House. Jennie Wade was the only civilian killed during the Battle at Gettysburg. The guide was the same as the night before, but she was in costume pretending to be the mother of Jennie Wade. 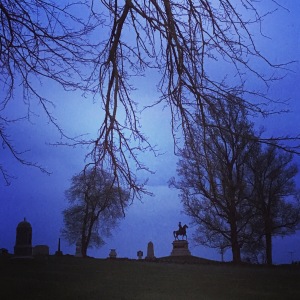 The only “photo” of Jennie

After a tour of the home, and some history about the day Jennie died we went into the basement. This basement was a little creepy with a replica of a dead Jennie on a bed covered with a blanket as well as a painting of a similar scene, but with her family surrounding her. They had to take shelter in the basement after Jennie was killed.

We were encouraged to take many photos and then survey them for orbs and misty areas. Carlos and Tyler were allowed to use the guide’s “Ghost Meter” EMF sensor to see if they could pick up on any paranormal activity. They swear they did, but I didn’t see it! They also swear they saw a ghost. We had some really enthusiastic ghost hunters on that tour adding more enthusiasm to the experience.

On Saturday it was time to head home, but first a swim and a final mega pillow fight. The ride home was long but uneventful. The boys played video games, drew, talked, and watched movies while I listened to podcasts. We stopped for lunch in Allentown where I managed to find a delicious vegan kale salad and a smoothie.

I love traveling in every form. Flying off to foreign lands is fabulous, but there is also something distinctly adventurous about taking a road trip. As nit picky as I can be about planning and organizing other areas of my life I tend to leave road trip plans very loose. Our motto for this trip was go with the flow and we did. There were no schedules or time constraints. I let the kids energy dictate the course of the day. These two boys are full of spunk and love to be active. They are curious and game for just about anything.

Before I left I got a few funny looks when I mentioned that I was traveling solo with my son and his friend. Well it was a blast. I had such an amazing time. Carlos and Tyler were great fun to spend time with. They were also respectful and kind. It was an easy and extremely enjoyable trip. I would travel with them again in a heartbeat. I have heard that the feeling is mutual.