When I was about Carlos’ age my mom took my sister and me to Gettysburg, PA. I loved history even as a child. Years later I went on to get a Bachelor’s Degree in History. Although my focus was Latin American History, I always loved learning about early American and Civil War History. I took the very popular UMass course, Civil War through film, taught by Dr. Stephen Oates. It was a multimedia class that drew many History and non-History majors into a large auditorium on Tuesdays and Thursdays at 4pm. But nothing brought the Civil War to life more than standing on the battlefield in Gettysburg, and I wanted to experience that with Carlos.

Last week was spring vacation. Since Orlando is back to work after a winter layoff, I decided I would take Carlos and his best friend on a road trip to Gettysburg and Hershey. They are 9 so I had to balance it out…a little bit educational, a little bit sweet fun!

We hit the road on Wednesday afternoon. It should have been about a 6 hour drive, but we hit traffic on I84 in Connecticut and then stopped for dinner at a restaurant on the Hudson River in New York. Proud mom moment #1: The waitress complimented the boys on their behavior and she was also very impressed that they were coloring and reading while waiting for their meals instead of playing on electronics.

After about 8 hours on the road we arrived at the hotel around 10pm and the boys were ready to explode with energy. The pool had just closed. The only other alternative to blow off some energy was to have an epic pillow fight (quietly) in the room. We all slept great that night!

I went into the trip with a very loose plan. Traveling with kids is unpredictable and I’ve learned that the less expectations I have going in the better. The kids took their time at the hotel breakfast making waffles and then they wanted to go swimming. Once they were ready we started out at Gettysburg National Military Park.

We got to the park mid-morning and were instructed to head inside the National Park Service Museum and Visitor Center. I purchased the package which included a two hour bus tour, viewing of the short film “A New Birth of Freedom” narrated by Morgan Freeman, and access to the Gettysburg Cyclorama program.

The bus tour was first. Our guide was fantastic, very knowledgeable, and talented with his ability to keep the kids engaged. We stopped at a few locations where we were able to get out for a bit, take photos, and walk around. 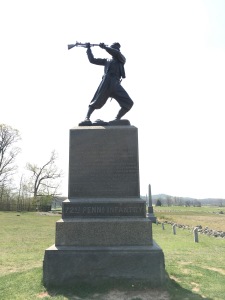 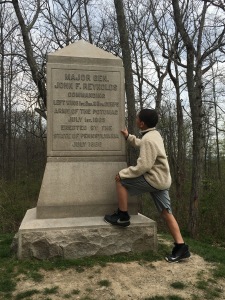 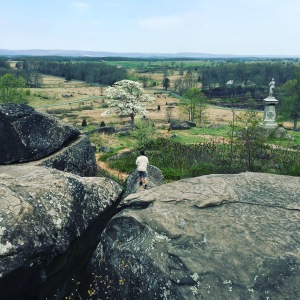 Once back at the Visitor’s Center the boys picked out toy swords from the gift shop. Then we went to the film and Cyclorama. Both were excellent visuals to bring to life what we had just seen out on the tour. They were not long programs making them perfect for children.

What I didn’t realize is that anyone can drive the grounds of the park and stop along the way at the many statues, memorials, and graves. There are paved roads as well as walking trails throughout the park. I would have enjoyed seeing more on my own, but the boys were hungry and ready for a change of scenery.

We went into the town of Gettysburg to explore a little. First I booked tickets to our evening ghost tour. Carlos and Tyler are obsessed with anything scary. After that we walked around town looking for a place to eat. Gettysburg retains that quaint feel of old colonial days. If you ignore all the cars, paved roads, modern hotels, and people with iPhones you can almost feel what it might have been like during the time of the Civil War. 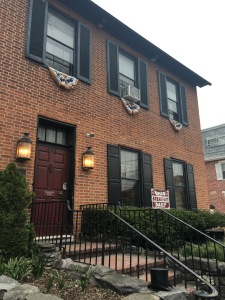 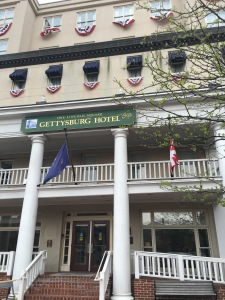 Proud mom moment #2: the boys were once again complimented on their behavior during lunch. The waitress commented on how unusual it is these days to see kids without electronics. Interestingly I didn’t even have to ask them to leave the electronics in the car.

After lunch we walked around and went into a couple of shops. The old fashioned candy store was a favorite!

That night after more swimming and dinner we returned to town for our first Ghost Tour. Thursday night at 8pm we met outside of Ghostly Images for our tour of the Haunted Orphanage. The children were said to have been tortured by the woman who ran the orphanage at one time. The guide was very theatrical and did a great job of setting the stage so to speak for our journey to the basement of the orphanage where we had the opportunity to sit in the dark “pit” that once  served as punishment for the bad children. We also spent some time walking around outdoors near the cemetery while the guide shared many more ghost stories. Whether you were a skeptic or a believer it was certainly entertaining. The kids loved it so much they asked to go on a different tour the following night.

Next up Hershey, PA.

One thought on “Spring Vacation – Gettysburg”