I drove about 45 minutes from Shreveport, LA to the small town of Marshall, TX. My hotel was practically on the highway exit to Marshall so I checked in and then set out to explore the town. 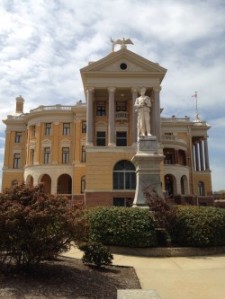 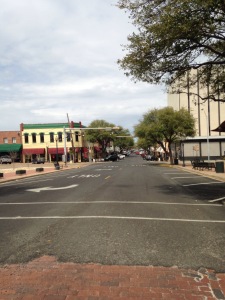 Quiet street on a Friday afternoon in downtown Marshall, TX

There was not much happening in Marshall. I expected to see more people with the conference set to start in just a couple of hours, but the town was very quiet. I read that a few of the local restaurants were offering special vegan menus in honor of the conference so I grabbed a quick lunch at Sweet Sabine’s Restaurant. I enjoyed a veggie wrap and a delicious vegan carrot ginger muffin.

The conference opened late in the afternoon at the Marshall Conference Center. I checked in around 4:30 and made my way around the small vendor area. I watched the Vitamix guy do his thing and grabbed a sample of his green smoothie. I was mostly in awe that some of the main presenters, like Dr. T. Colin Campell (co-author of the China Study), Matt Frazier (No Meat Athlete) and Christy Morgan (The Blissful Chef) and were just walking around chatting with people. I have read their books and blogs anonymously and there they were chatting with folks and posing for photos. I suddenly became very shy! I felt a little out of place wandering around by myself.

Inside the large conference room a small vegetarian chili competition was happening. I tried the three different chilis and voted for my favorite which had almond butter in it. Sounds strange, but it really was delicious.

A local fitness group did a zumba presentation while people began to fill the auditorium in preparation of the opening night of Healthiest 2015. I sat anxiously in the third row with my glasses on and notebook in hand. How badly do I want to go to college again?!! Dr. Campbell was literally about 3 feet away from me politely talking with anyone who approached him. I posted about it on Facebook and a few friends insisted I try to talk to him or at least get a selfie with him. I couldn’t do it!! Instead I took a photo of him talking to someone else. He’s 81 years old!

Mayor Ed Smith and his wife Amanda opened the conference with a short discussion of the origins Healthfest. It began as part of the Get Healthy Marshall Texas movement which was started by the Smiths. Mayor Smith was diagnosed with prostate cancer in 2008. After transitioning to a whole foods plant based diet the cancer was halted. Mayor Smith and his wife have encouraged and motivated their community to take charge of their health through their own enthusiasm about living a plant based lifestyle.

They introduced the keynote speaker, Rich Roll. I’ve mentioned him on the blog. I have been listening to the Rich Roll podcast for a few years now which feature a range of guests from the likes of well known health and wellness experts, bloggers, athletes and inspiring people who have overcome diversity. These people are truly living their dreams and motivating so many along the way. Rich told his story, one that I’ve heard on the podcast and read about in his book, Finding Ultra. 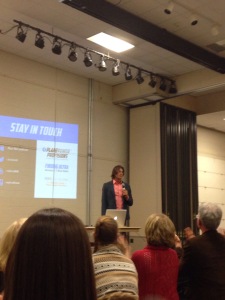 Next up was Dr. T. Colin Campbell with a discussion of his famed book, The China Study, which essentially chronicles the link between nutrition and chronic illnesses. He also touched on the subject of what many find difficult about adopting a whole foods plant based diet (WFPBD). 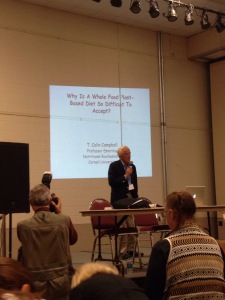 The Origin and Meaning of The China Study

The last presenter of the night was Chef AJ. She’s a performer and is clearly at home on the stage. Her talks are informative with a heavy dose of comedic grit thrown in for texture. She’s got a witty sarcastic humor that resonates with me. She also looks amazing and attributes her svelte body to the rather rigid oil free, whole foods plant based diet she has been living for years. Her message is all about eating to the left of the red line something I will discuss in another post. 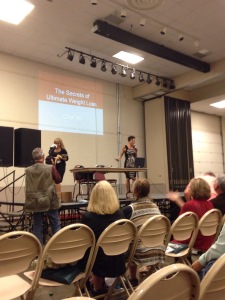 The night ended with the winner of the Chili cookoff being announced. I returned to the hotel tired, but excited for the next day of the conference. I browsed the Healthfest schedule and tried to decide which sessions I really wanted to attend the next day as so many of them overlapped or were held at the same time.