All my intentions to blog this week fell to the wayside so instead I’ll wrap it all up in one long post.

I started the day with a 15.30 mile run. I felt like I couldn’t get my legs moving, but my heart was in it all the way so I pushed through. I actually ended my run at the grocery store. Did my shopping for the week and had Orlando and Carlos come get me!

Sunday afternoon Carlos made his First Reconciliation aka Confession. They don’t go in the confessionals anymore. Instead our parish priest invited priests from neighboring parishes. There was a mini mass led by our priest and then the kids are led over to one of the priests to confess their sins. Once they finished they returned to their pew to do their penance. Carlos was very serious. He had a doozy of a sin to confess. I will leave it at he called a friend a really bad word.

After church we went to lunch with his best friend, Tyler, and his family. Tyler came over after and while the boys played I got to work in the kitchen.

I made a batch of quinoa, brown rice, roasted zucchini, brussels, butternut squash, hard boiled eggs, made a few sandwiches for Carlos’ lunches, a pot of Mozambican beans, chopped up raw veggies for soup later in the week, cut up pineapple and cantaloupe. I was on fire!! It was awesome.

Back to work. I saw a couple of patients. I went for a lunchtime 3.40 mile run because the sun was out. I felt a little tight in the quads after the long run, but otherwise my legs seemed to move a lot easier. In the afternoon I had a Webex meeting about Safety and Security. The instructor was intense. I feel like I have call for back up before entering a building.

Carlos had his 8 year old physical at the pediatrician’s office. All went well. He is healthy and growing as he should. I love his pediatrician. The office is small and cozy. There is almost never anyone in the waiting room. Th doctor is reasonable, intelligent and laid back. He also makes Carlos feel very comfortable. Plus he does a lot of world travel so we always spend a little time catching up on our respective travels.

Tuesday nights are coffee nights with my friend Kate while our boys are at karate. It’s one hour I look forward to all week even though we are often together other times during the week.

I had to go to Worcester in central Massachusetts for a work meeting. I finished up around 12:30 thankfully and headed home. My friend, Colleen, came over in the afternoon to go for a run. It was incredibly windy out, but we made it 3.69 miles.

I’m going to vent a little about a work issue. I often have to work with an interpreter because most of my patients are Spanish speaking only. I have begun getting more comfortable with my Spanish and I am able to go alone if someone can speak/understand basic English too. Since I’m new and I haven’t met the patients yet I always take an interpreter for a Spanish speaking patient the first time. My interpreter was supposed to meet at my house shortly before 9:30. We had three visits scheduled. She didn’t show up. I texted her, no answer. I called her and was nonchalantly told she ran out of gas. By the time she arrived to my house 30 minutes later she was very apologetic. Although I was irritated, I tried to be understanding. However, I don’t really understand how someone runs out of gas in this day and age. I was frustrated that she didn’t call me when it happened. Technically if the interpreter is accompanying us then we both have to go into the visit together.

I accelerated the first visit a little and managed to make it to the second visit on time only to find no one home. The interpreter called the patient’s phone, no answer. She reached her son only to be told he forgot to tell his mother about the visit. Ugh! We were able to complete the third visit early and returned to see if the second patient had returned. No such luck.

I ended up taking the interpreter out for coffee to make up for the way the day started. I know she didn’t mean to be late. I just would have appreciated a phone call. We chatted over our coffee and ended the day on a positive note.

After finishing up some work at home I decided to go for a run because it was so nice out. I managed to do 3.47 miles with an unusually great time for me these days. I thought about the marathon a lot. I am really beginning to visualize myself running it.

Carlos had Garage Band class after school. He takes a class which teaches the kids how to use the Garage Band app to make their own music. He thinks it’s awesome. Orlando and I both went to pick him up because at 4:30 the school was hosting Evening Share for the students to show off their school work. Carlos is writing a lot of stories. We saw his report on the Earth’s mantle. He showed us what he’s currently working on in math. He goes to Montessori so the math is extremely different from anything I’ve ever learned. It’s tactile and visual. He is doing division right now in 2nd grade.

We are so proud of Carlos. It was wonderful to see his face all lit up as he showed us around the classroom explaining what he does during the school day.

A rather uneventful day. We had a monthly statewide Webex meeting first thing. I had one patient to see after that.

In the afternoon I had a call with my boss. She walked me through a rather complicated situation that came up regarding one of my patients this week. My boss is terrific. I’m really lucky to be on her team.

While working from home in the afternoon I prepared a big pot of lentil soup for dinner. Super easy because I had already chopped the vegetables on Sunday. Orlando and I loved it. Picky Carlos was not thrilled.

Carlos and I went over my aunt’s after dinner to drop something off to her and visit for a bit. It was snowing out, but fortunately it was not expected to accumulate to more than an inch or so.

I procrastinated my long run until 10am. The snow was still coming down at a good clip. It was really sticking thankfully. I had to get going because I was running the Holyoke St. Patrick’s Day 10K Road Race at 1pm. This year the road race was going to be a fun run for me. No PR, no powering up the hills, just fun with friends who were running the race for their first time. So I had to get in a long run before the race. I ran 10 hilly miles around home with the snow in my face almost the entire way. How is that even possible? Surprisingly the 10 miles zipped by. I felt awesome.

I made it home with just enough time to take a quick shower so I didn’t offend my friends during the race! We might as well just walked from my house to the start of the race which is about a mile and a half away because we had to park almost a mile away. This race is huge. It was my fourth year running it and by far the most enjoyable. I wasn’t wearing headphones so I could hear the roar of the insane mass of spectators along almost the entire course. I stayed with two of my friends the entire way. There was a group of 5 of us running, but two shot ahead at the beginning and just ran with it. 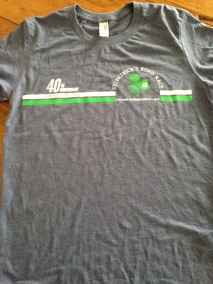 This year’s was the 40th anniversary of the Holyoke St. Patrick’s Day 10K. Running legend, Bill Rodgers and the inspirational running team, Dick and Rick Hoyt were participating in the race. Unfortunately I didn’t actually see any of them.

It is hugely popular, totally wild and by far the most awesome race I run every year. It’s a sea of green everywhere you look. People are dressed in a variety of costumes. I saw one guy dressed as Gronkowski from the Patriots, with a Gronk mask, the team shirt and fake plastic buttocks?!! Spectators were hopping onto the course to smack his ass. I saw a guy dressed as a banana which was actually more suggestive than the Gronk costume. There were hundreds of green tutus on men and women. Of course there were superheroes too. You get offered water, beer and jello shots at the water stations. 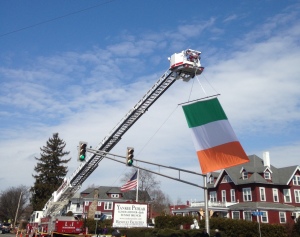 After a gray morning with thick slushy snow raining down wouldn’t you know it stopped completely as I finished my long run. By the time the starting gun went off the sun was shining. I call that the luck of the Irish! 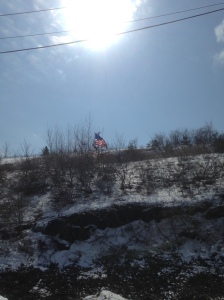