When I commit to training for a marathon I know exactly what that means. It means at least 4 months of training. Training consists of many hours each week and often daily. There is a master schedule of work outs, stretching, cross training and foam rolling. Preparation for long runs includes packing fuel for the road, filling the Camelbak, putting on sunscreen, making sure electronics are charged and running clothes are ready to go.

For training to be successful I have to analyze my workout schedule against the schedules of everyone in my family. I have to make sure I have someone available to watch my son if my husband has to work or has another commitment. I also have to be ready to tackle long runs after working all night. It happens and there is little I can do about it so I’ve learned how to do it successfully by getting adequate rest the night before, eating well and staying hydrated.

Marathon training is as rigid as it is flexible if that makes any sense. In order to be well trained on race day you have to follow your training, get the miles in, strengthen your body and mind, and stay healthy. At the same time life happen. You have to be flexible with your training and creative about how you get your workouts in. You have to roll with changes in schedules, weather and how your body is feeling.

Last weekend I went away to visit one of my best friends in the Plattsburgh, NY area. The weekend plan was made a couple of months ago. Initially I was going to bring Carlos along which would have made running on the weekend near impossible. I was prepared for that, but as the weekend inched closer my sister said she would love to have him for a couple of days. This worked out fabulously for everyone. Carlos loves his auntie and jumps at any chance to spend time with her so I knew he would have a great time. Orlando had a side job to do over the weekend and was working his regular job on Friday when I left for New York so he couldn’t go with me or be home to watch Carlos the entire time. I don’t get a lot of time to myself so this was a rare treat. Nothing like a 4.5 hour drive to belt out some tunes, chit chat on the phone and listen to podcasts!

I re-evaluated my workout schedule and adjusted it to the new plan. Instead of having to do my 20 mile long run upon returning home on Sunday I could now accomplish it first thing on Sunday morning. I even managed to get in a couple of extra short runs on Friday and Saturday.

On Saturday night I got everything ready for my early morning run. I set the alarm for 3:50am! I went to bed fairly early for me, around 9:30pm and slept like a log. I jumped up with the alarm and got rolling. I was out the door of my hotel by 4:40. The sky was still dusky, but light was on the horizon. The air was cool with only a tinge of humidity. It was perfect running conditions. One of the best things about running when you travel is being able to enjoy different scenery. I was thrilled to have an unanticipated course for such a long run.

Sunrise on the horizon over Lake Champlain

Plattsburgh, NY is a bit off the beaten path for most, but my introduction to this lakeside city wasn’t a result of my friend relocating there. I first came to Plattsburgh in the mid-90s for a weekend long phish concert. It took place at the old Air Force base. Ah the memories…sort of!

In the last couple of years, however, I have gotten to know Plattsburgh quite well with more frequent visits to see my friend and also running a half marathon there back in April. I didn’t map out a route, but headed for the bike trail I remembered from the half marathon. 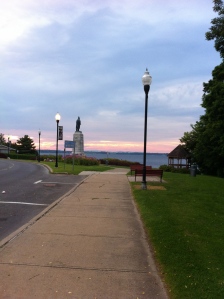 The run was going really well. I felt awesome. My pace was on target for my marathon goal. I was killing it until about mile 11 when I had to stop to try to figure out which direction to turn. I decided to back track and seek out another trail I had read about. Then I ran out of water in my Camelbak around mile 14. Luckily I came upon a McDonald’s. The cashier gave me a cup and I was able to fill my Camelbak with cold water for free.

I continued on and at mile 15 I found the other bike trail I was looking for, a little late unfortunately, but I ran on it for about a mile before heading back towards the hotel. My pace had slowed a bit at this point, but I was still going strong mentally. As I approached mile 17 my foot got caught on a small metal post sticking up from beyond an uneven patch of sidewalk and I went flying in the air before slamming on the ground on my left knee then rolling and banging down on my right shoulder. My hands landed hard enough to get scraped up and my middle finger was bleeding when I stood up. I peeled my sweaty banged up body off the pavement, wiped myself off, shifted my Camelbak back in position and turned my Garmin back on praying it still worked. It did and came right back to where it had stopped when I fell. I mean how crappy would that be to lose the ability to track my mileage with only 3 miles left to go! I have now downloaded the Map My Run app just in case.

So after catching my breath and getting over the embarrassment of wiping out, I popped my music back on and off I went to finish what I started. My knee was sore, but after a little bit it loosened up. My middle finger bled for the better part of the next mile and a half, but I just kept wiping it on my pants. It didn’t hurt at all and was just a tiny hole. Part of me felt all bad ass, the other part of me really wanted the run to end.

It started raining as I neared the hotel, but it felt good. Despite a slower pace for the last 5 miles I managed to pull it out and complete mile 20 in under 10 minutes for a strong finish.

Victorious! Scrapes and all!!

7 thoughts on “A Long Commitment”