Orlando and I are the proud landowners of two plots of land here in Mozambique. We are  financially unable to purchase land in the US, but given the relatively low land prices here in Mozambique it was a wise decision to invest in land here.

Our first purchase was a simple square of land high on a hill overlooking the lagoon of Bilene. We opted for the spanning view of the crystal blue water over a waterfront plot on the backside of the lagoon. We are both drawn to expansive views. The waterfront land was isolated and offered a lovely sight of the water, but it abutted land already owned by a resort. That signaled potential future issues namely a busy flow of people bringing with them noise and litter. After touring the waterfront land we were driven to the land on the hill. I think we both knew instantly that it was our land. I would have accepted any decision Orlando made because this is where he is from and I wanted him to feel most connected with the choice, but I knew beyond a shadow of a doubt when I saw the land on the hill that it was his preference too.

There is a view I swear

A hint of the blue water 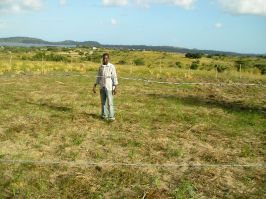 My brother-in-law Samito checking on the wall

These are older photos from when the wall was going up around the land. The photos obviously don’t do the view justice.

Orlando worked hard to secure the purchase of the land in Bilene after our 2009 visit to Mozambique. I admire his tenacity. Like most processes here in Mozambique buying property is no easy task, complete with a great deal of bureaucracy, red tape, bribes, and paperwork. My brother-in-law assisted with the transaction, but the sale was not concluded until we next visited in 2011. 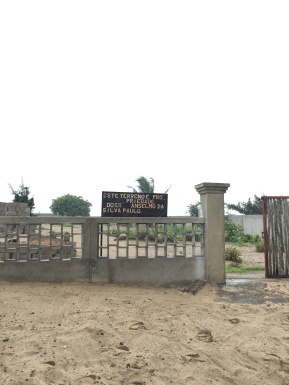 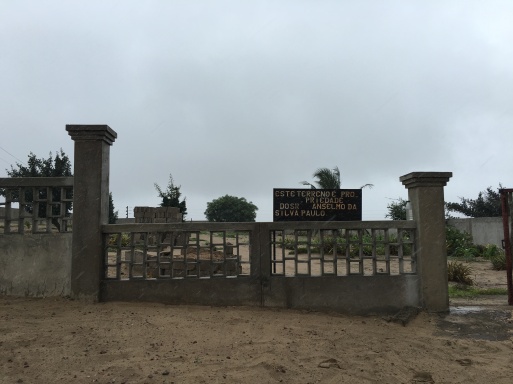 The land has a mandatory wall surrounding it, a specially made sign designating it as ours and some fruit trees. There is a family nearby that is paid to care for the land and the fruit trees. One day we will build a home there.

After renting homes in Chokwe during our visits in 2009 and 2011 we had talked about the possibility of building a small “dependencia” on my in-law’s land. A dependencia is a small house which is typically devoid of a kitchen and bathroom as those activities are usually done outdoors. Cooking is done over a coal stove and many bathrooms are still outdoor latrines. My only stipulation was that our dependencia have a functional bathroom indoors. At some point Orlando was confronted with the opportunity to buy land in his hometown of Chokwe, where I also served as a Peace Corps Volunteer. The plot was in a newly developed area which was once vacant land housing an old ruined stadium and a newer soccer stadium. We had seen the development on our visit in 2011 and I didn’t need much convincing that it was the right place for us to build a home. Orlando worked through his brother to secure the land purchase. I think it went a little more smoothly than the first time he bought land.

Orlando got the land cleared and started the ball rolling for construction to begin during his solo visit to Mozambique in February of 2015. He returned from his trip motivated and energized by the prospect of having our own home in Chokwe. The first order of business was to build a dependencia for my brother-in-law to live in so he could also guide the construction of the main house. I’m happy to see that his dependencia has a small kitchen inside and an adjoining bathroom which is much fancier than a latrine. I know Orlando feels a sense of security knowing that his brother is watching over things.

Our house was initially meant to be a small two bedroom home to provide us with a comfortable place to stay when we visit. I stay a safe distance from decisions affecting the land here. I am included in discussions and dilemmas surrounding the building process, but I tend to be less opinionated about it than I am about other issues. Orlando made a sacrifice leaving his family to relocate to the US and although he has carved out a successful life there, I know he misses home. I want this home to feel as though it is about him. After some thought and conversations with his brother and friend here he decided to make the home much bigger than originally planned. We now have a three bedroom, two bath home complete with a large open living room/kitchen space, and a garage. I’m not demanding and I actually prefer to live in simple surroundings, but my one request again was that I have a nice functional bathroom for my visit in December.

I was assured “my bathroom” and the bedrooms would be ready for our visit this December. Unfortunately I know Mozambique all too well and like most things here construction is also slow. We have walls, a roof, windows with screens, doors, bare bedrooms, and some semblance of a bathroom. It turns out the bathrooms were built too small and they furnished one bathroom with the basic equipment to function for our visit, but once we leave it will all be ripped out. The two small bathrooms will be joined to form one large bathroom and there will be a second bathroom installed on the other side of the house. 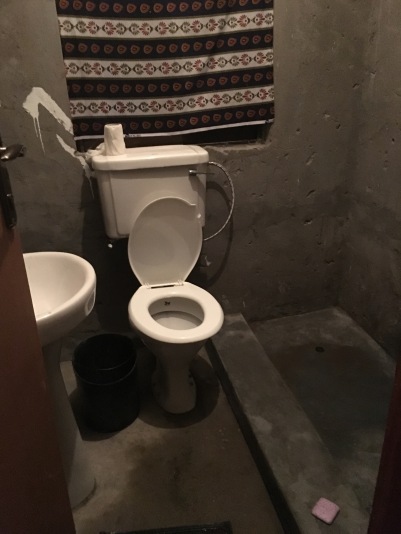 We spent the first night in Chokwe in a hotel so Orlando and his brothers could prepare the home for our stay. The bedrooms had beds, a reed mat and mosquito nets that we brought with us. After a couple of days I requested a strong rope be strung up in the closet and hangars so I could move our clothing out of the suitcase. I also bought a plastic shelving unit to house toiletries, under garments, socks, and some books I brought. Surprisingly that was enough to make me feel settled.

We lost water most days from morning until late in the afternoon so I took a few bucket baths. That I can handle. When I did shower in my half done cement bathroom it was no shower curtain, but given the heat the water felt refreshing anyway. Carlos actually opted for bucket baths in my brother-in-law’s bathroom. He has no interest in the “weird” cement shower. Considering some of the bathrooms I have had here in Mozambique this one, although not my dream bathroom, is not the worst I’ve had to use. 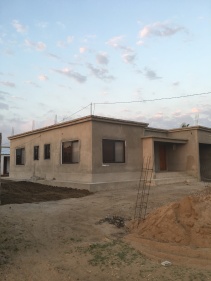 Side of the house

The front of the house

Entrance to hallway of guest bedroom and garage

Orlando has spent a great deal of time discussing future plans of the house with the construction crew. He is not thrilled about how some of the process has gone, and he would like to rectify that as the project moves ahead. His immediate goal is to finish the house and rent it until we return for our next visit. There is an abundance of need for rentals in Chokwe because of all the aid organizations working in town.

I’m proud of what my husband has done. It is nice to have a place to come home to that we can call our own. It grounds us and connects us always to this place where we first met, fell in love and got married.

7 thoughts on “The House in Chokwe”