Remember sleepovers? Well I woke up to the sound of Carlos and his friend Tyler belting out Gangnam Style from the massive fort they made in the living room. It was about 6 a.m.

First order of business was to run to the farm to grab our farm share. It’s a half share and I am able to select my own produce. 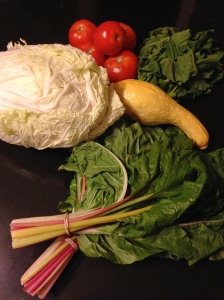 The boys had a soccer training at 10:45.  It was blazing hot, but they got through it. We met Tyler’s mom and brother for lunch after and then we all went apple picking. It was the very first day of picking at Dickinson’s Farm in neighboring Granby, MA. Here are few photos of our afternoon outing.

Tractor ride to the orchard

Apple of my eye

The rest of Saturday was unplanned. I helped my friend unpack and organize. They just moved into her mom’s house. I love organizing! It’s much more fun with a friend. I think we got quite a bit accomplished. Carlos and Tyler played zombie hunters for hours. We all ate pizza for dinner and then walked to the town commons for frozen yogurt and coffee. Awesome day!

Carlos had his first skating session of the new season. This is his third year in the Learn to Skate program. He can obviously skate by now, but has no interest in playing hockey. He was apprehensive about joining because he said he wouldn’t know anyone since all of his skating buddies moved on to hockey, but said he wanted to do it. Well he was pretty aggravated about going Sunday morning and gave me attitude on the way there. At the end of the lesson he was beaming from ear to ear. He said, “mom the coaches love me. They all remember me and the main coach told me that I could help out with the new skaters. It was awesome!”

I’m so proud of Carlos. He is an only child and often does things alone. I could care less if he ever plays hockey. I think knowing how to ice skate is a great skill on its own. He’s a decent skater. He can maneuver stick and puck thanks to these lessons. The most important thing is that he is out there moving his body, getting a little physical activity and he will most certainly make new skating friends.

I emailed the coach the next day to let him know how his kind words had affected Carlos. I thanked him for the hard work he and all of the coaches put into the program and for instilling confidence in the children. This program is phenomenal. It is extremely well organized. The kids learn quickly, but skills are reinforced each week. It is also a serious bargain at $99. It runs from September through March. At the end the kids are awarded trophies and a certificate. Each Monday we receive an email from the head coach explaining the drills that were taught, information on what is to come in the program and a lot of encouraging words about the progress the kids are making.

After a busy, eventful night at work I just wanted to run. I didn’t care how long or how far. I simply wanted to run. So I dropped Carlos off at school and took off from there. I’m enjoying new running routes around his new school. It’s in an area I really love and I welcome the change of scenery. It was an absolutely gorgeous day. The sky was clear and it was not too warm. 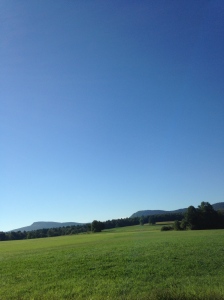 I ended up running 5.56 miles at a rather decent pace. This is one of my longest runs since the injury. I felt amazing! I’m excited to start building up my mileage again.

I felt a surge of productivity and dug into to my basement project at last. I started organizing the things I will sell at a tag sale and made a throw away pile. I got quite a bit done for the first day.

Monday afternoon Carlos had swimming lesson at Mount Holyoke College. This is also a fabulous program. It runs three weeks in the fall and three weeks in the spring. It serves as a fundraiser for the swim team. The girls on the team teach the children strokes. Carlos already knew how to swim when he started last fall, but the improvement in his strokes was phenomenal. He is usually with his friend Tyler and one instructor so it’s almost like a private lesson. This session he is also doing diving lessons because he wanted to be able to swim in the “hot tub!” The diving pool is heated. So far he loves the diving lessons too.

Carlos is not a competitive kid. My goal is to expose him to a little bit of everything without putting any pressure on him. This fall he is doing ice skating on Sundays, swimming for three weeks and he is playing on a local in-town soccer team with his friends. These are all things he enjoys doing. I want him to stay active, but at the same time I want him to have fun while learning new skills.

I had coffee with a nurse friend. We actually never worked together, but I got to know her a little bit when I trained on the cardiac unit. She is no longer working at the same hospital, but we are friends on Facebook and have very similar interests particularly in places we travel. She is a wonderful nurse, very intelligent and dedicated. She is going through a transition in her career and I am beginning to think about transitioning out of the hospital myself. It was nice to chat with her about nursing and pick her brain on different things I should think about.

In the evening Orlando and I went to Back to School Night at Carlos’ new school. I’m even more certain that we made the right decision to send Carlos to a Montessori school. It was a tremendously informative event. I learned so much about what Carlos does each day. It is a very interesting environment that promotes learning, respect, kindness, cooperation and independence. Carlos is still loving his school days. He anxiously awaits Mondays during the weekend!

Since my mom was babysitting for Carlos we took advantage of the opportunity to go out to dinner afterwards. Orlando and I haven’t had a date in ages. We went across the street to a local favorite, Mission Cantina. The laid back atmosphere inside is no indication of the fabulous food. The guacamole was perfect. My request for a vegan friendly dish was easily accommodated and I was treated to delicious grilled vegetable enchiladas verdes. Orlando went with the traditional chicken molé. It was nice to sit back and catch up a bit.