We finally landed in Sydney on Sunday, July 20th. As we neared the airport we were treated to a view of the famous sights of Sydney’s harbor, the Opera House and the Sydney Harbor Bridge. We got to our hotel, the Westin Sydney, in the early afternoon.

View from our hotel room in Sydney

We were traveling with my sister who was there on business so we dropped our bags and left her to catch up on email and other important business.  It was an overcast cool day, but a great day for walking. So without a plan we just headed in the direction of the harbor. The hotel was very centrally located and only a 10 minute walk to the harbor.

My first impression of Sydney was that it was your typical big city. It was clean and I loved the look of some of the buildings. I found out later that many of the buildings are made from sand stone which was found in abundance in this area.

News and flower stands in Sydney

Statue in the shadow of the financial district

Once down at the harbor I stood for minutes just taking in the view. There were tears in my eyes as I realized that this was a 30 year old dream come true. The bridge and Opera House are more spectacular in person than I imagined. Although we would see the harbor multiple times daily during our stay the feeling I got looking at it never grew old. 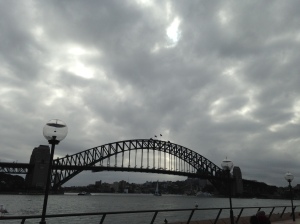 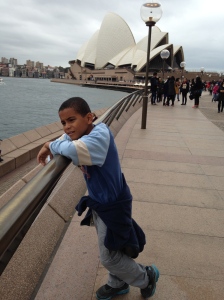 Walking towards the Opera House

Even on a cool grey overcast day the harbor was a beautiful sight to see. 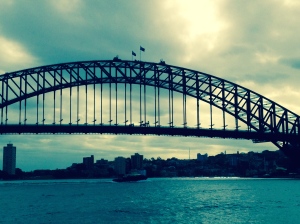 We walked around for a while, watched some Aborginal street performers playing the didgeridoo, checked out the colorful boomerangs, grabbed a handful of pamphlets advertising the many tourist attractions, took tons of similar photos, booked a tour of the Opera House and stopped for a quick lunch. 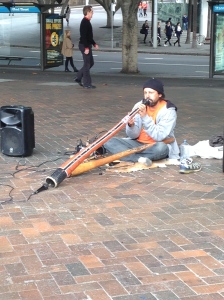 After lunch we went to the Opera House for an hour long tour. The tour was $37 for adults and $20 for children. If you are traveling to Sydney it’s good to know that many attractions can be booked online and will offer a 10% discount. I had my phone with me, but could only use it on WiFi so we were unable to access the discount.

The Sydney Opera House was built from 1957 to 1973. This architectural masterpiece was the brainchild of Jorn Utzon from Denmark though he resigned from the project in 1966 and was replaced by Peter Hall. The distinctive roof of the Opera House is said to resemble the sails of a sail boat. Life certainly does revolve around the water there so it is fitting that the architecture would somehow be tied to the sea. The Opera House has various spaces including the Concert Hall, the Joan Sutherland Theatre, the Drama Theatre, the Playhouse, the Studio, the Utzon Room and the Recording Studio.

My photos don’t do the building justice. You are not able to take photos in the concert halls. We saw the hall where Don Giovanni would be playing later that night. We also saw another hall that was set up and just getting ready for rehearsal.

Inside one of the halls

A view from inside the Opera House

Self cleaning tiles that line the “sails” of the Opera House

Carlos in front of the Opera House

After our tour of the Opera House we made our way back to the hotel, did some exploring around the hotel, went for a swim in the cold “heated” hotel pool and then decided to pass on dinner because we were both exhausted. Not bad for our first day down under!!