I completed my very first Half Marathon on Saturday, October 9, 2010.  I ran the Hartford ING Half Marathon.  I have been on such a high since I crossed the finish line. I know that right now would be a good place for some background information as this is also my first blog post, but I am going to save that for a bit.

It was one of the most incredible experiences of my life.  I was joined by my husband and son to the starting line.

My shy little guy with me at the starting line 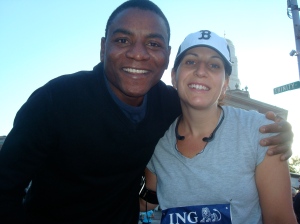 My super supportive husband with me

The starting line was a bit chaotic with the marathoners and half marathoners starting all together.  It was exciting to be surrounded by so many runners and supporters along the course.  I could hear a whisper of the national anthem being sung from where I was standing in the back of the crowd.  Then the gun sounded and we were off, sort of.  I walked almost all the way to the actual starting line before I was able to begin moving at a slow jog.  We all moved through the street together for about a half mile before the course split and marathoners went one way and we went the other.

I felt great.  My breathing was steady.  My legs felt strong.  The weather was stellar, sunny, cool with a light breeze…a perfect fall day.  I was smiling.

I didn’t see a mile marker but I was glad.  I didn’t want to know where I was. I just wanted to run and enjoy every moment.  I watched everyone around me.  I reveled at the people encouraging us along the way.  I paused my music when I ran by the entertainment provided along the course.  The DJ at the 3.5 mile mark announced our position.  That was the first moment that I had any idea of my mileage.  I didn’t pay attention to mile markers again until I came upon the large arch announcing the half way point.  I let out an exclamatory shriek and did a dorky fist pump at that moment.  But seriously I felt fantastic.

This was turning out to be one of the best runs I have ever had.  The course wound through lovely Elizabeth Park.  Just before we entered I caught a glimpse of my time at the 8 mile mark.  I was at 1:28.  I did some rudimentary mental math and figured out that I was making decent time (for me).  I went into the race with the goal of finishing by 2:30.  I knew that it was easily attainable if I stayed at a comfortable pace.

Mile 10 had a time clock too.  I was at 1:50.  I couldn’t believe that I only had three miles left.  I also couldn’t believe how wonderful I felt.  The playlist on my iPod pumped out energizing music.  The shouting supporters made me smile.  I gave high fives to children who had their hands out along the way. Why doesn’t everyone do this?  I was having the time of my life.

Then mile 11 presented us with a small challenge, a steady uphill climb.  I trained on hills.  I could do this I thought.  I took it slow and kept my pace steady.  My feet were starting to feel slightly uncomfortable, but nothing major.  I focused on my breathing and I pushed on.  Then I saw the mile 12 marker and we started running downhill.  I took advantage of the decline and picked up my pace.  I could hear the rouse of the crowd getting louder.  Then I saw them all, people shouting, waving banners, signs, blowing whistles…all of them there to cheer a loved one as they crossed the finish line.  I scanned the crowd for my guys but it was madness.  I then looked up at the time clock 2:21.  I could feel tears well up in my eyes.  I threw my hands up in the air as I crossed the finish line. (just a funny aside, the crowd was going wild at this point because as I crossed the finish line so did the first marathoner.  Truly amazing that someone ran twice as much as I did in the same time.)

I think I could have kept going.  I felt amazing (does that cover every adjective to describe how I was feeling).  Throughout the race I realized that I had completed an excellent training.  I was well prepared.  Despite this I was still in some disbelief.  I just ran a half marathon – ME!