This afternoon the bug (another nickname for Carlos) and I did a very very basic take on the Thankful Jar for the upcoming holiday.  I would love to claim that on top of my usual daily activities I am also part Martha Stewart and come up with unique and creative arts and crafts projects for my son each and every day.  Well I don’t.  Instead we stuck foamy letters to a giant plastic cup that spelled out “We are thankful!”  I would take a picture and post it but honestly it is pitiful.  I cut out strips of colored paper and Carlos and I began with what we are thankful for today.  When my husband gets home from work we will include his in the jar.  I am hoping to write one thankful strip each day from now until Thanksgiving.  The kids did something similar in preschool and I thought it would be nice to carry it out at home.

Today I am thankful for a lot of things.  This morning after work I enjoyed a lovely breakfast with my Mom, Aunt and Carlos at my favorite breakfast restaurant.  I had a delicious spinach, mushroom and swiss omelet.  It was loaded with fresh spinach and thick, hearty mushrooms, light on the cheese and a side of their homemade sun dried tomato basil toast – perfection!  I rarely eat eggs so when I do they have to be something special.  It was a nice morning.  Carlos and I came home and I was thankful that he played with his train set for nearly an hour while I accomplished a number of tasks I just hadn’t been able to get to like posting a pair of barely used expensive North Face boots on Craig’s List, catching up on email, doing laundry.  I was quite productive.

I am also very thankful that Carlos took a 2 hour nap today.  I rested on the sofa and watched the Amazing Race.  I did a few more things around the house before he woke up.  Then we took a quick trip to the local library.  Carlos is currently addicted to Charlie Brown and the Peanuts.  We rented “My Valentine, Charlie Brown.”  He also got a Blues Clues DVD and a Curious George book just in case anyone wanted to know what 3 year olds are into!!

We came home and did our Thankful Jar.  Now Carlos is coloring while watching Charlie Brown and I am writing this post.  My husband just walked through the door which makes me thankful since it is pouring out and he commutes over an hour away.  I’m also thankful that my husband is home a few minutes early because that means I will hopefully get to bed a few minutes early.  I am in the midst of a three night stretch at work so sleep is of the essence.  Good night. 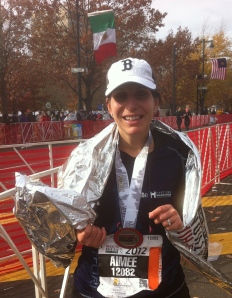 Hi there! My name is Aimee.

Thanks for stopping by. This blog is definitely a work in progress and I hope that you will keep coming back to see what I'm up to and where I'm running.

The purpose of this blog is not to give medical advice or provide counseling. It serves only as an account of my personal experience and opinions.